THE working people of our country have by now in full gear to go on a one-day historic general strike on February 28. All sections of Indian workers, in every corner of the country, have been preparing for this united action for the last three months.

The decision to go on a day's strike, as is well known, was taken in a national convention of central trade unions and industrial federations in New Delhi on September 7, 2011. On that day, all the central trade unions recognised by the government of India came to a joint platform for the first time in the history of independent India, to announce a day's general strike. This was to press for an agreed charter of demands which covered policy issues as well as immediate demands of workers, both in the organised and unorganised sectors.

This call was fully endorsed by independent federations of those working in various sectors, like state and central government employees and teachers, bank and insurance employees, defence production, telecommunication, petroleum and natural gas, electricity employees etc.

All these organisations began vigorous preparations during December 2011. Joint meetings and campaigns began by the end of that month.

Central leaders of all trade union organisations went to various state centres and also attended sectorial meetings at the national level in order to prepare for the strike.

The series of state level conventions began with a successful and massive convention in Hyderabad on January 5, with more than 2500 representatives from all over the state attending it.

January 9 saw an open air massive convention of all sections of workers in Kolkata, calling upon the workers of West Bengal to make the proposed strike a big success. National and state leaders of all central trade unions attended the convention.

In Kerala, a massive convention was organised on January 17, in which 18 organisations, central trade unions and various state level organisations, were represented. Addressing the convention, state leaders of these organisations approved a detailed programme of campaigns all over the state, and also sectoral programmes. These included district conventions, dharnas, vehicle jathas etc.

A mass meeting at Kochi on February 1 was addressed by central leaders including Gurudas Dasgupta (AITUC), Saji Narayan (BMS), A K Padmanabhan (CITU), Chandrasekhar (INTUC) and others.

Reports received from various states showed that district and regional or local level conventions were also being organised in every part of the country, and that workers from various unions are participating therein with much enthusiasm.

One important development is that huge preparations had been going on at sectoral level.The central trade unions organised a convention of central public sector unions at Bangalore on January 13, and it evoked response from unions all over the country. This was the first time that such a convention was organised by all central trade unions. Among those who addressed were Dr Sanjeeva Reddy, B N Rai, Gurudas Dasgupta, Tapan Sen, R A Mittal (HMS) and M Shanmugan (LPF), apart from leaders of the Joint Action Forum of Bangalore PSUs and Coordination Committee of Hyderabad PSUs.

The convention adopted a declaration, calling for massive participation of PSU workers in the strike. It was circulated among PSU workers in large numbers.

This successful initiative prompted various unions in PSUs, like coal, petroleum and natural gas, NTPC, powergrid, telecom, etc, to come together and issue joint appeals. These were signed by national leaders of industrial federations or representatives in the national level negotiating bodies.

All the five federations in the port and dock sector, including those led by the HMS, CITU, INTUC and AITUC, issued a joint statement. Joint preparations for the success of the February 28 strike followed.

Leaders of national federations in public as well as private road transport sectors met at New Delhi and issued a joint statement. Regional and zonal level preparations are also made.In the defence production sector, AIDEF, INTUC and BMS affiliated federations were jointly organising campaigns all over the country for the success of the strike.

In the telecom sector, all the workers' and employees' unions including the BSNLEU, NFTE and FNTO came together to plan countrywide campaigns to make the strike complete Sectoral conventions and meetings were also held in various states. In Kerala, a massive convention of unions in central and state PSUs was held at Kochi on February 2, where state level campaigns were planned. Similar campaigns were planned in other states also.

As has been the practice, all unions in the banking and insurance sector will participate in the strike en masse. Countrywide campaign meetings were held in these sectors.Held at Hissar in December, the national conference of the All India State Government Employees' Federation, the largest organisation of state government employees in the country, unanimously decided to participate in the strike. Its leadership at all levels has been making all necessary preparations for a successful strike.

The Confederation of Central Government Employees and Workers, representing all sections of central government employees including postal employees, has also called for turning the strike into a massive action of protest. The confederation leadership chalked out a countrywide tour programme for the campaign to ensure that the message and demands of the strike were taken down to the central government employees at all levels.

The recent united struggle of postal employees against the threat of closure of RMS and post offices in the country achieved success when the government was forced to give a written assurance not to close any office for the next three years at least, due to which the proposed indefinite strike was withdrawn. Now the postal employees' unions are fully involved in preparations for the success of the February 28 all-India general strike. Leaderships of the NFPE, FNPO and GDS unions jointly went on a countrywide campaign among the postal employees to ensure complete strike in the postal department.

A meeting of unions in the Southern Railway, including the DREU (CITU), SRES (INTUC), DRKS (BMS), AISMA, AILRSA, SRLU, SREF and others, conducted a campaign in the divisional headquarters in the zone and also among the passengers to explain the demands. Demonstrations will be held in all the divisional centres on February 28, and all workers will wear badges on the day.

Apart from posters, millions of handbills have already been circulated and more are being brought out. Wall writings are going on in various parts of the country..

Thus, with reports still pouring in from different states about the massive ongoing preparations for the strike, one may be pretty sure that the strike on February 28 will see an unprecedented participation, that men and women workers in the country will make it a historic one in all aspects. Firmly united, the working class is on the move and will be out in the streets to challenge the policies of the ruling classes. 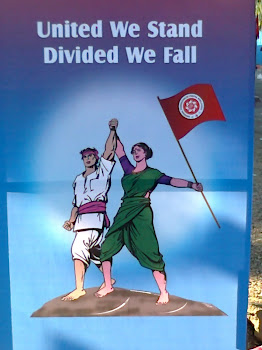